Late last summer our pool developed a terminal problem which it signaled when its water level started to drop rather quickly. 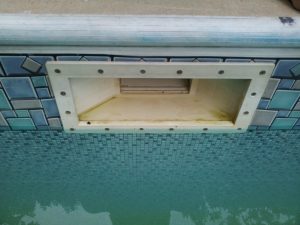 Sensing a real problem we did all sorts of diagnostics with dyes, etc. At first we suspected a possible tear or seam failure but not finding anything obvious, we suspected the plumbing. We replaced the pool light (it needed it anyhow) and checked the underground wiring conduit for a leak. But no luck, the water level continued to drop. After a while (since we were constantly filling it with cold well water) the water became just too cold to get in to to hunt for leaks, so we let it go and stopped adding water. When the level finally stabilized, it had dropped below all of the inlet/outlet fixtures except for the main drain, and the shallow end was completely dry. With no holes visible either the drain was leaking (our worst fear and most expensive fix) or the liner had simply failed with thousands of tiny leaks which we would never find. Given that the liner was replaced in 1998, with its 14 year life span this vinyl liner was just about due for replacement anyway and owed us nothing. We hoped that replacement would do the trick so we let it go and threw the cover on for the winter. This spring we contacted our pool company (Budd’s Pools in Deptford, NJ) and picked out a new liner.

While the last liner was ok, it never really looked that great. This time we decided that we really wanted something a bit more dramatic. After thumbing through all of the liners in the literature from the various companies, we narrowed it down and took a Saturday to visit the store and see the liner samples in person. As luck would have it, our choices  fell to the wayside when we looked at one of the sample pools filled with water. In it was a liner that we would have never chosen based on the samples as “too busy”. Surprisingly with water in it, it looked far better in person, which goes to show that at least with pool liners you gotta see them in the flesh to really get a sense of what you are buying. The last one we chose strictly from a sample, only to find that once in the ground and filled, it was a bit less successful.

This past Friday the installers came out and ripped out the old liner. They didn’t find anything obvious in the way of tears, etc., but did note that the liner was a bit brittle and suspected that it had sprung a lot of tiny leaks. Not as bad as some, they said, but its time was definitely up. After pressure testing all of the plumbing to 12 lbs of air, they certified that everything was in good working order and that our concerns of a possible plumbing leak were alleviated. Next up, the floor had to be smoothed and patched (it is a mixture of vermiculite and sand) and the new foam liner went on the metal walls. Once that was done, the new liner was laid in and the filling began. Because we have ground water, a drain line is buried to pull it away from the pool area during liner replacement and a vacuum pump is used to suck the liner against the pool walls so that as it fills, no wrinkles appear.

Once the water level reached the duct tape mark,  about the bottom of the steps, the pumps were removed, the light put in and the return drains and the skimmer were cut out. Then it’s simply filling the pool and balancing the water. Oh yes, since our well water comes out at about 60 degrees, it will be a bit of a wait for the solar blanket to get it up to temp.  It’s nice to look at, but I don’t swim in water that is that cold. Brrrrr!

And so it goes. This year with the new liner installed and renewed interest, I think that we just might get the back yard renovations back on track. Our pizza oven is on its way and I will be having some help with the myriad of projects that need completion, so maybe 2013 is the year the back yard finally reaches our vision!