The sun was bright again the next morning and after a rather expensive breakfast at a local bar-it seemed that the closer we were to get to Santiago the more we were to be overcharged-we struck out for Arzua. Soon we had left the city roads and were once again in forest, walking in little groups again. Jon and I walked together as we came upon a rough bridge made of flat but uneven boulders stacked on stones which crossed over a tributary for the river Catasol. It was to be a rather a dicey crossing and I wondered aloud about the ones to follow us. Once through the forest, we walked parallel to the road a bit, and was back into the woods until we came upon the town of Boente, where we stopped at the church for a sello and a few pictures. Off again to our next stop, the German Cafeteria el Aleman. The ground had grown more level and the walking had been easy so we were in high spirits by the time we arrived. The coffee and the pastries were great and sitting in the bright sun in their garden area, life seemed beautiful!

Eleanor broke out some of the provision left over from the night before and soon we enjoyed an impromptu early lunch. We split up again, with Alida Jon an I setting off. A couple of km later we ran into Jim-not for the first time-who was ahead of us, sitting in a bar having a glass of wine. we stopped briefly for water and Jon and I set out alone. The terrain began to get hilly again and the climbs and descents again steep. It was on this part of the camino that we crossed the Rio Iso with the very picturesque Albergue de Ribadixo. 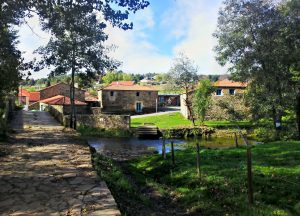 With that behind us we climbed out of that beautiful valley and onto the main road into Arzua. Our lodging for the night was to be the Albergue Via Lactea, or translated, Hostel Milky Way. As soon as arrived I visited the kitchen. I had complained loudly about the spaghetti alla carbonara the day before and had gone into a great discussion of how to make it properly and now was my chance. After a quick shower, Jon, Eleanor and I struck out for a supermarket that I had spotted along the way in. I could not find proper parmesan cheese and prosciutto and had to settle on the local variants, but everything turned out just fine. For the vegetarians in the group I bought mushrooms to substitute for the meat. We added a salad, complete with a balsamic reduction that I did on the spot, plus bread, olive oil and wine. As soon as the kitchen was available we took it over. I enlisted Alida as my sous chef and I began to cook. Soon everyone was in the kitchen, plates were served, people ate and as a gesture of friendship, Eleanor offered this about 12 year old  German? chatterbox of a boy some carbonara. A good time and dinner was had by all, and being able to cook for the group was one of my fondest memories of our trip! Too bad that I was way to busy to take pictures.