Bad pun/reference, I know. My life is full of them and Phil Collins would probably shoot me for that one. But what he wouldn’t shoot me for is the luscious offerings from out D.I.Y. sous-vide cooker. This project, which has been in the works for well over a year has finally come to fruition. As I write four lovely, bacon-wrapped filet mignons, gently massaged with olive oil, fresh cracked pepper and sea salt are luxuriating in a bain maire of 54 degrees Celsius. Not 55 or 53… exactly 54. And in that gently circulating bath of precisely controlled water, good things happen. Very good things, indeed. It’s the magic of sous-vide.

Indulge me with my primer or skip on down:

Everyone is familiar with time cooking. It’s what we do because we can’t accurately control the cooking temperature. Ok, maybe so in an oven to a general range of degrees, but even then we are really just controlling how quickly the heat penetrates whatever is in the pot. We ask questions that are in essence: Is the cake dry enough inside? Is the connective tissue hot enough to have broken down? All of this is based on cooking with too high of a temperature with timing being the critical component. What we are not used to doing is saying ” That meat needs to be 128 degrees and it needs to be that temperature all of the way through. And therein lies the value of sous-vide cooking. So what’s the deal?

First, the two French terms: Bain maire=water bath and sous-vide= without air. So we are cooking to an exact specified temperature in a tightly controlled water bath in an airless container. Why the temperature control? Consider the filet mignon. While it is a cut prized for it’s tenderness, it is basically devoid of fat. Overcook it and it instantly becomes lifeless and tough. At a perfect rare/medium, it is unctuous, but raise the temp too much and it’s lost it’s glory. That’s the magic that sous-vide delivers. So what  else can sous-vide do? Think custard-y yoked soft boiled eggs with perfectly jelled whites-every timme without fail. Think fish, poached to exact doneness evenly through. Or think vegetables cooked perfectly, but not tough. Sous-vide is a whole new palate to discover, a cooking technique that honors the essence of food. And so, with this new cooking vision you might ask yourself; “And how can this sous vide? For it is the Kwisatz Haderach!” (groan)

Enough. Now to the real stuff.

Our D.I.Y. sous-vide cooker project was a lot of start and stop with mostly a lot of stop, owing to the fact that our ancient Daisy (yes, Daisy) deep fryer has doubled as a sous-vide cooker with a little help from our digital temp/timer gadget plus an expandable vegetable steamer basket in the bottom, I felt that the basket was important because it keeps the food from coming in contact to the heating element in the bottom as it cycles on and off. The temperature does bounce up and down as I fiddle with the analogue dial trying to get the temp to settle in to where I want it.  But as the water and food come close to the desired cooking temperature I am able to adjust the dial so that it barely kicks off and on. Fortunately unlike cooking over a flame,  small variations in temperature are easily tolerated. If the water gets slightly too hot while the food is not to temp, then turning off the heat will let it settle back.  In the end Daisy turned in very respectable results and taught me a lot about  this style of cooking. In may ways, that $9.95 cooker from K-Mart has gone way above and beyond; I fry in it, I sous-vide in it, I slow cook in it. Money very well spent! 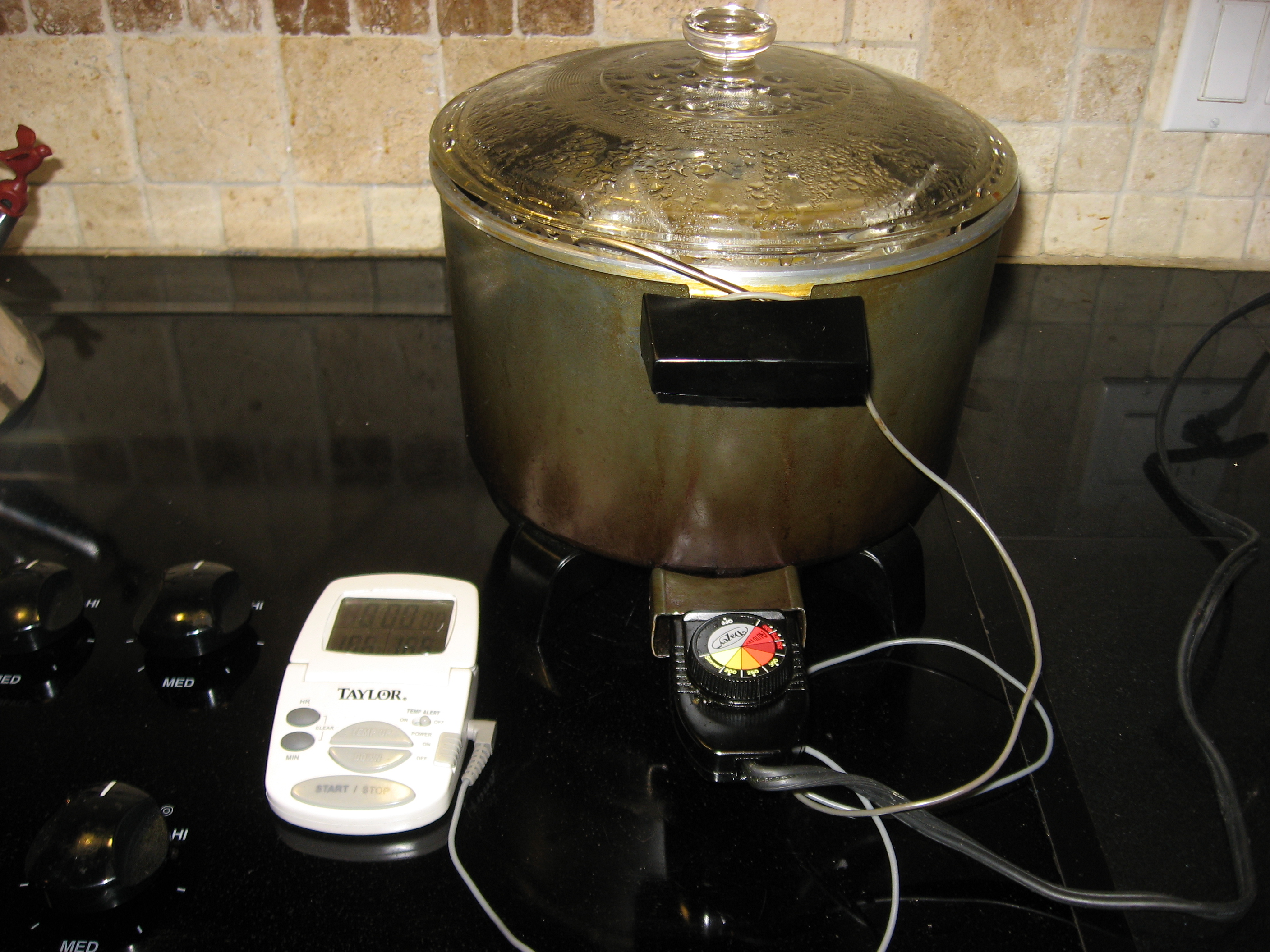 A caution about sous-vide cooking: Pathogens. As a species we learned early on that heating an edible beyond certain temperatures stopped us getting sick sometimes. I refer you to the PolyScience page  http://www.cuisinetechnology.com/blog/food-safety-with-sous-vide-cooking/ for the real skinny on how to keep everyone happy and enjoying your cooking. Plus you can find other good info there while you are at it.

If you want to experiment with sous-vide on the relatively cheap you can buy a sous-vide controller that is designed to control your favorite crock pot or deep fryer and there are those that swear by them. Or you can fiddle with my makeshift setup to go really cheap, but be prepared for a bit of a learning curve. I was aware of these crockpot controllers before we started but that sort of setup was not our end goal-plus I just love to tinker. We wanted a dedicated sous-vide cooker so that we could get the best possible results and that meant building our own sous-vide box.

Fast forward several months. I started this post a while ago but then wanted to actually have the box done before continuing, so now that its done and in use, here we go:

The actual box is a covered container from the Home Depot. I chose it because it has a lid that has locks on either end (the green clips), is 3 gal., which is enough water to cook in but not so much that the heaters can’t keep up. Plus it is rectangular which allows for good food placement and water flow.  After assembling the electronics I screwed the plastic control box to the lid of the cooking box. This way removing the lid pulls everything out of the water for easy access.  We assembled the electrics according to the DIY post and with a little fiddling, had it working in no time. The only real issue is that if the water temperature is way outside of the range of the controller-like 20+ degrees, the controller will not cycle correctly and overshoot. This is something that we haven’t figured out how to fix, so our solution for now is to let the water get to the right temperature and then turn the controller on/off. This resets it and it works fine from there. I did have one construction issue; I found that I had to seal the holes in the lid for the heaters and the probe better because moisture was getting into the electronics box. My first attempt with silicone didn’t stick well to the plastic box material, but tub and tile sealant did the trick. So now she is tight, moisture free and is a sous-vide cooking machine!

So far we have done steaks, butter-poached lobster, soft-boiled eggs, asparagus and a few other things. Our favorites, of course are the proteins, especially steaks. What a treat! Filet mignon is the perfect cut for the sous-vide/grill treatment. Cooked to a perfect rare/medium and then thrown on the grill for a very quick sear, it is heaven on a plate. Literally. We use a grilling plate heated way up for a fast sear. Within less than a couple of minutes we’ve crusted both sides to taste and kissed the edges. Because the thickness does not let the center rise during the short sear, the steaks remains perfectly cooked to the sous-vide temperature.

As we have learned sous-vide cooking is perfect for dinner parties. The great thing is that the steaks can be done hours before and just sit there, patiently waiting for the grill.  There are no timing issues and since you are only searing, no under/overcooking issues. It really amazes your guests when in one second you are throwing steaks on the grill and then in the next you are serving them these perfect steaks. Yeah. You’re the Grillmaster!

Oh, and the lobster? Succulent with great texture and not even a hint of a chance of them going rubbery. Just like steak, lobster and other lean proteins like chicken breast benefit greatly from cooking to temperature. All of the overcooking side effects like toughness and dryness are banished by the sous-vide method. The only real downside is that it takes a bit of forethought. Dinner will not be on the table within a half hour from scratch, but you can do your cooking ahead of time and have it ready to go in the refrigerator. When you are ready, just bring it back to serving temp. I’m sure that I’ll have more on this in the future. In the meantime, I have several hours that I want to devote to the perfect steak!

One thought on “Sou, Sou-Vide-eo!”